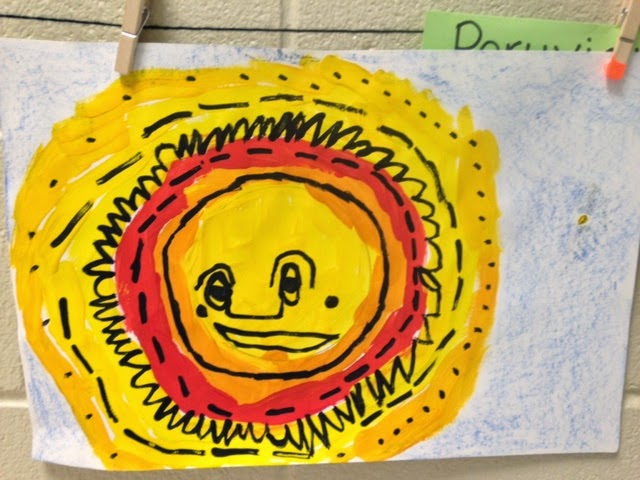 These sun paintings were inspired from book  "Up and Down the Andes". Painted suns with different values of yellows and oranges that I had mixed up. Black lines for face, and colored backgrounds with a blue crayon.
I got this idea from another website  or blog? Our kindergarteners were learning about Peru, so I did something as well. These were gorgeous! I used several for displays around school, in my room, and in the community for various art displays. 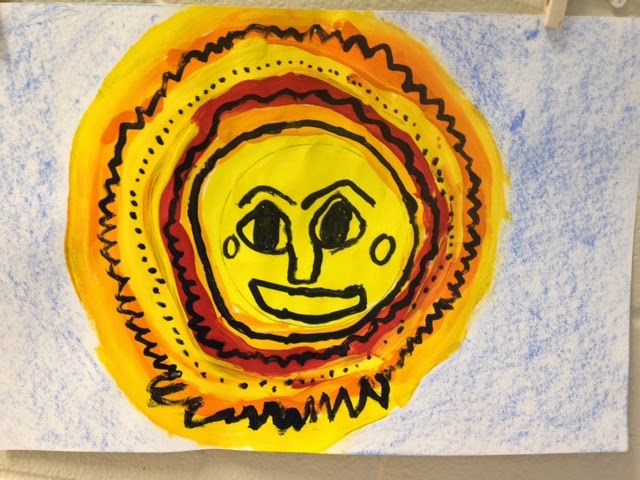 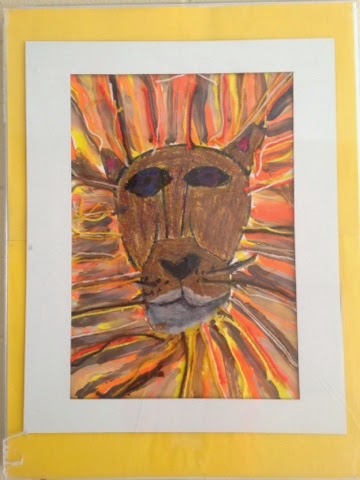 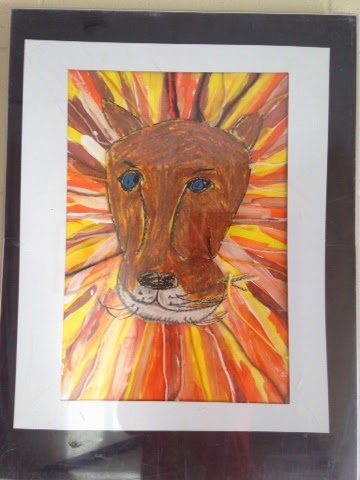 Posted by Courtney Edgerton Murphy at 7:27 AM No comments: 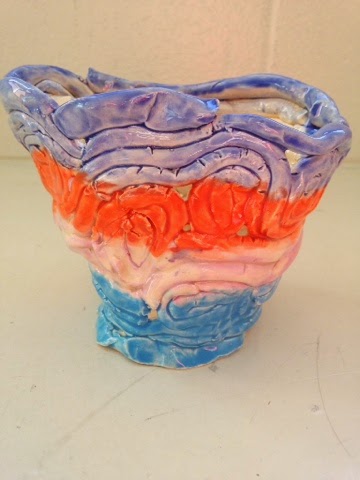 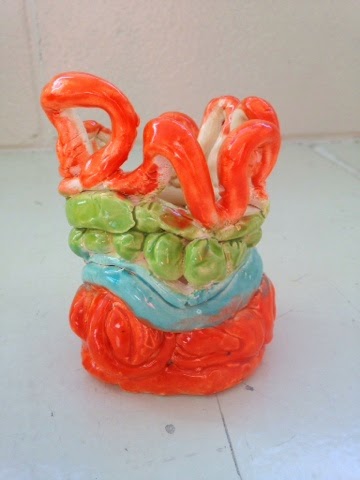 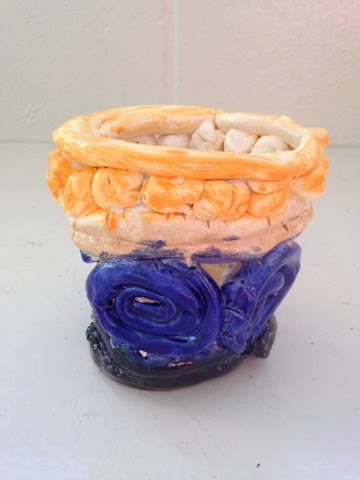 Posted by Courtney Edgerton Murphy at 7:26 AM No comments: 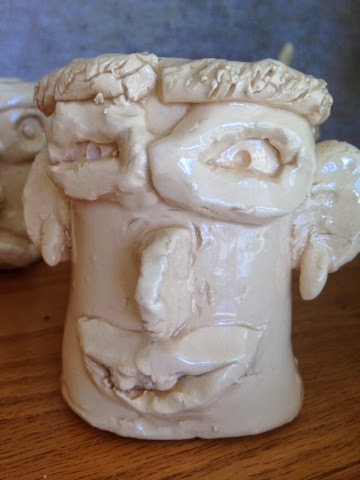 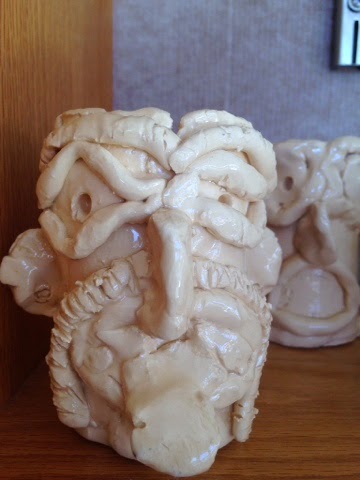 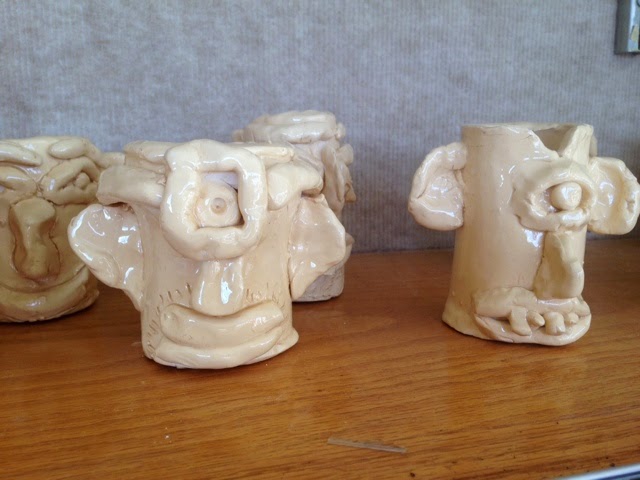 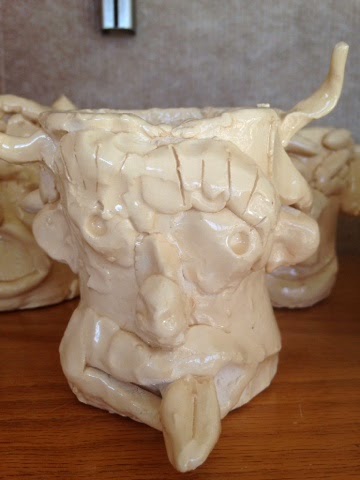 Posted by Courtney Edgerton Murphy at 7:25 AM No comments: 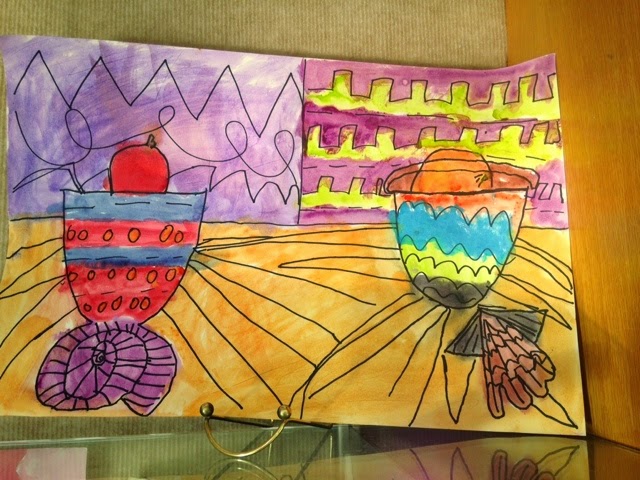 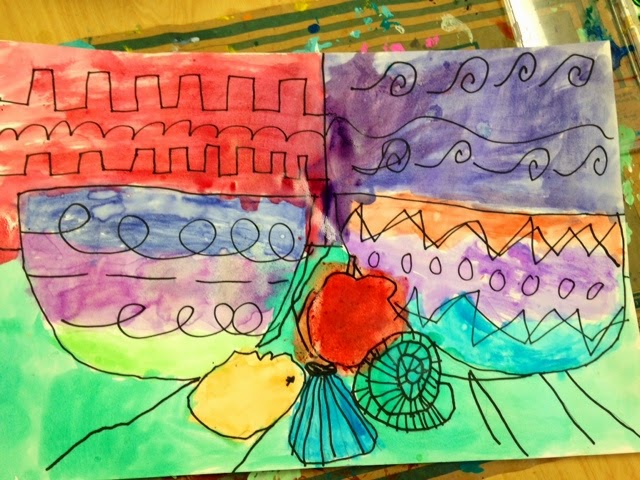 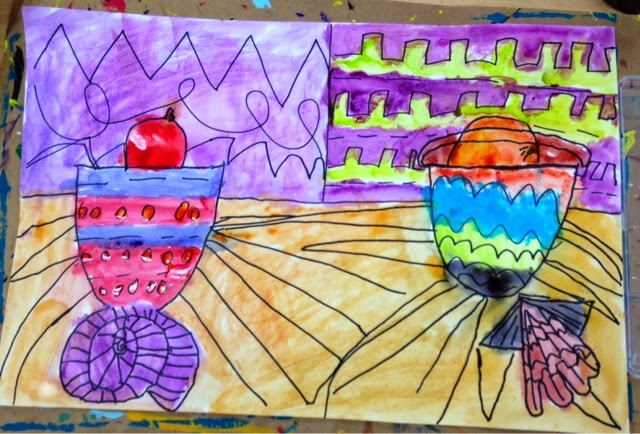 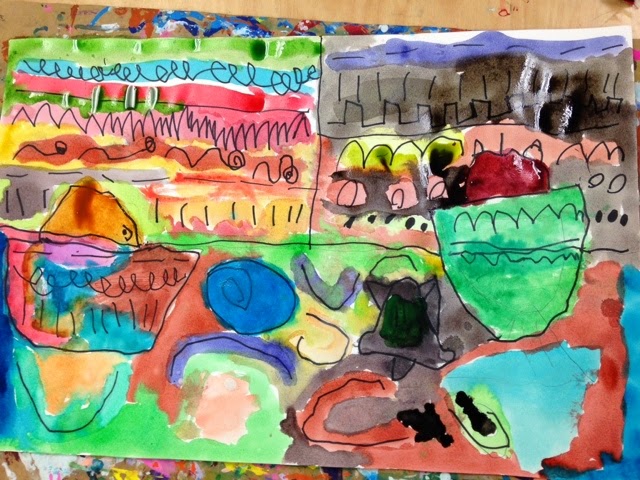 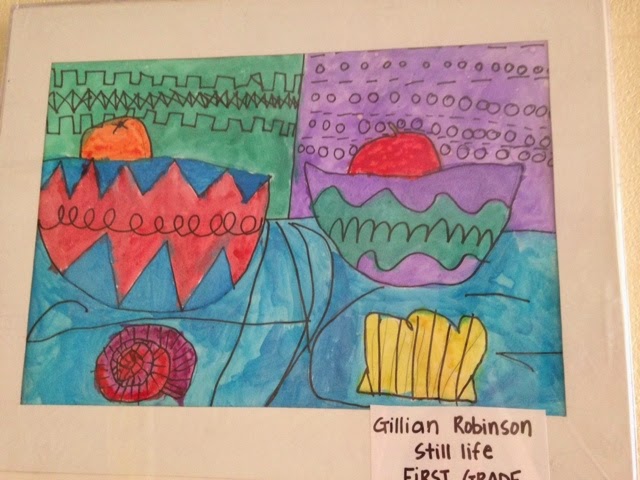 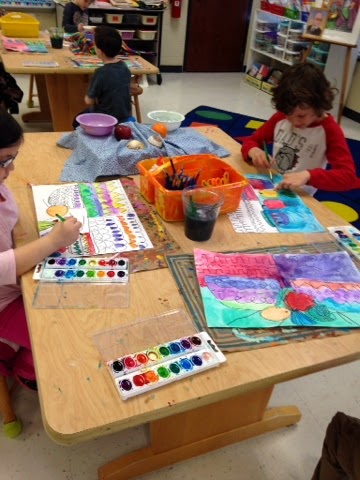 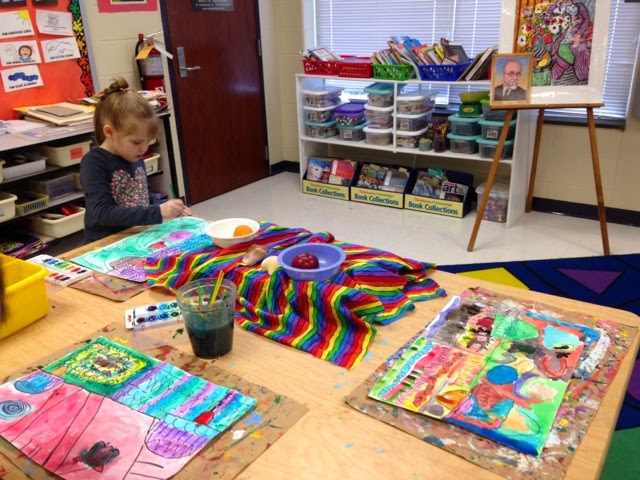 Posted by Courtney Edgerton Murphy at 7:24 AM No comments: 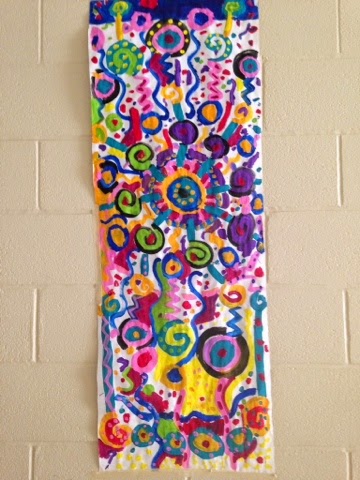 This lesson was done with fifth graders. There were six groups that worked collabortively on one circle painting. Circle painting was introduced as well as a short video. Each student had one color they had to use the entire time on their tables painting as well as the table's next to them. That way we could see where that student contributed in both paintings.
One student began the middle with a line, shape, or dot. The next student added to that idea, then the next, and the next. They took turns with this at the first, and when this was done they all just began painted at the same time. Each mark had to be connected to another. No painting on top of someone else's idea to cover it up, but details were okay to be added to each other's. The idea is too start in the middle and go out.
About half way through the class a group switched with another group to contribute on theirs. Four students were in each group so there were four colors at one table and a different group of four colors at the other group. That way a total of eight colors in each painting.
These were done on just white bulletin board paper. Final paintings were displayed in the halls.
At the end of the year, I will cut these in fourths and let the groups take home a piece of theirs.
Great group project! It took the entire 50 minutes for the lesson. 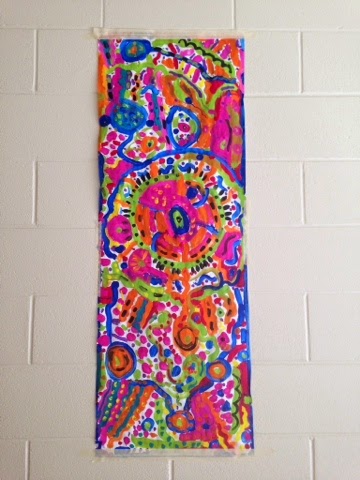 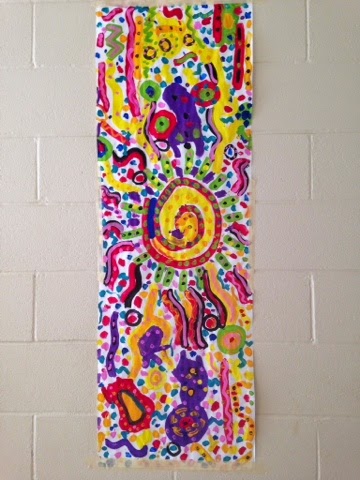 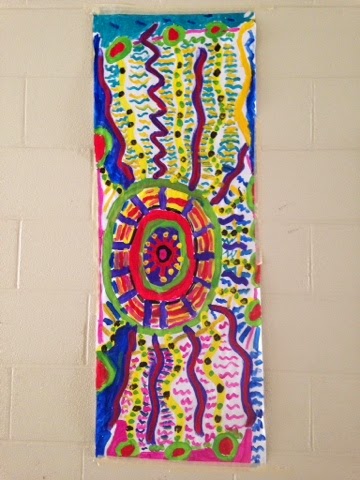 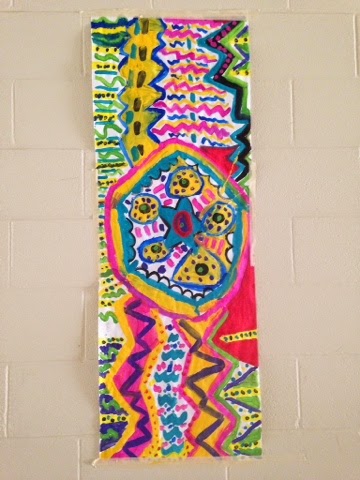 Posted by Courtney Edgerton Murphy at 7:20 AM No comments: 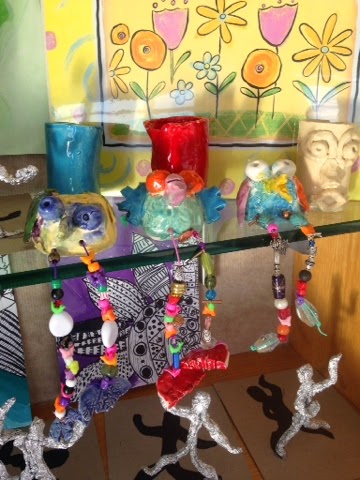 Both of these lessons were displayed together in our display case at school. It was only fitting to share them together.
The birds were made by third graders. The clay is cone 06 white stoneware. Students first created pinch pots and scored and slipped parts on to make birds. Holes were added for legs. After they were fired in kiln students glazed at then were fired I think at a cone 05.
Legs were made with art wire I ordered from Sax catalog. It was pricey, so really pipe cleaners would have done the trick too. I just really wanted the legs to dangle and beads move more.
This particular class made clay feet, which were glazed too. The other classes just used beads for the feet. Reason being, the feet broke , or they just simply forgot and also they fought over them because therewas no way to put names on the back (even with all my attends to keep them with the birds) The clay feet probably look better, but for my sanity I took that part out of the lesson.
These were adored by the students and everyone who saw them in the display case.
This lesson has been done several different ways. I got the idea off Pinterest. 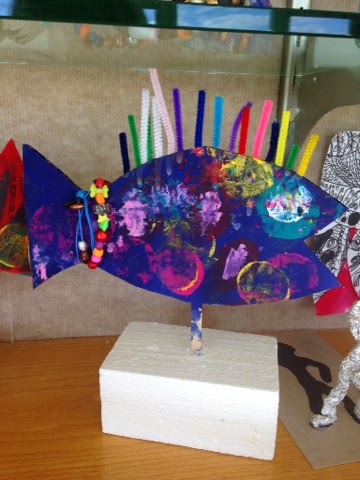 These super cute fobs were done by my adaptive kids, the autistic class and the lifeskills class. I cut the fish out of cardboard. They painted with tempera, stamped with circle sponges. Eventually used some of that great wire and beads for a mixed media look. Of course pipe cleaners glued in the top where the cardboard is corragted.
Both lessons and several other things I placed in their made a great spring/summer display. 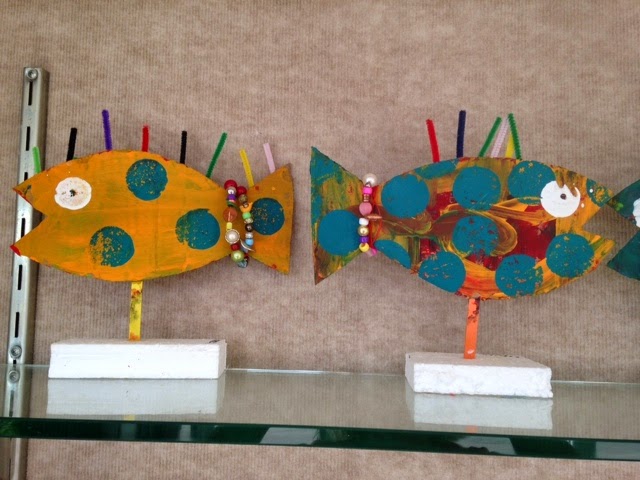 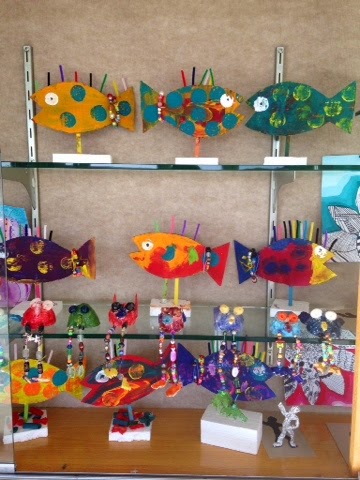 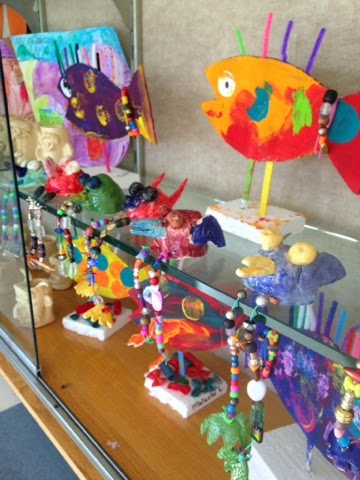 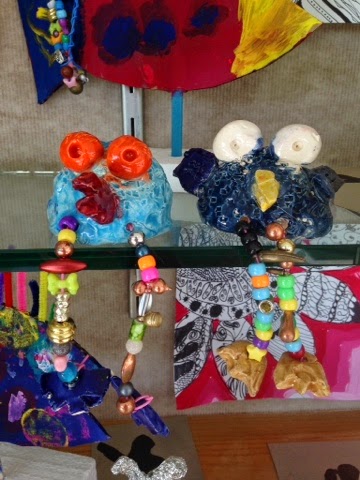 Posted by Courtney Edgerton Murphy at 7:02 AM No comments:

Courtney Edgerton Murphy
I am a full time mommy, wife and art teacher. I have been teaching elementary ART for 12 years at Polenta Elementary. I believe that I have the best job in the world because I get a chance to instill a love for the arts to my 1,000+ students. I am inspired by all the other art teachers blogging and wanted to share what goes on in my art room. Many of these lessons have been borrowed from some of these fabulous art teachers. Hope you enjoy!!